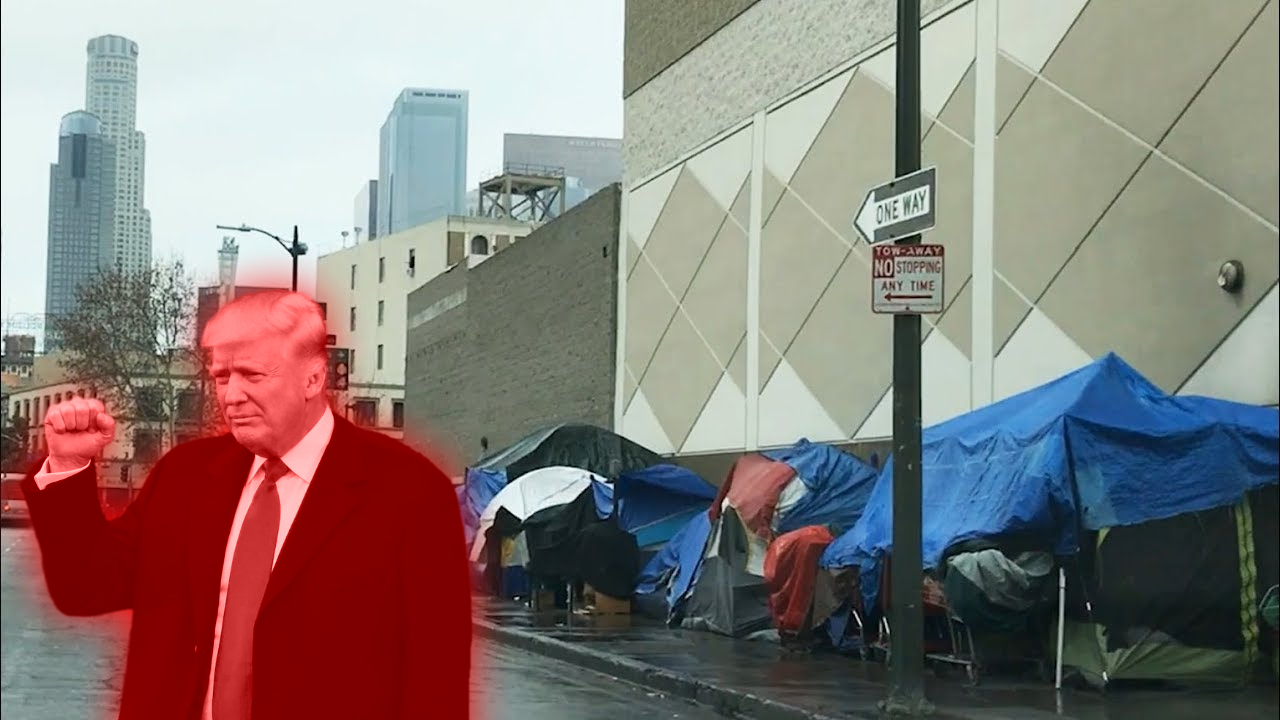 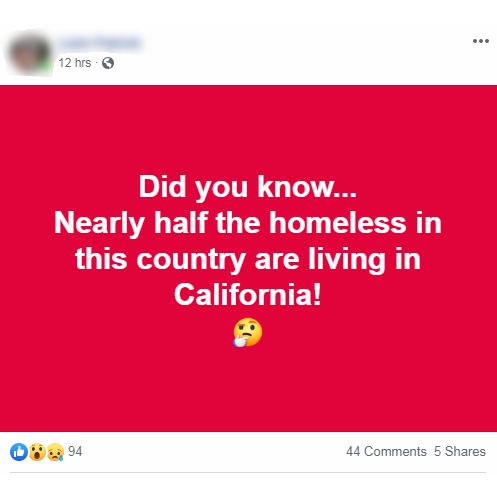 I’ve seen this claim, or a variation of it, floating around for awhile, in one form or another. I guess to people who want to shit on California, it’s okay to share and not look into it. But I’m here to be the asshole correcting the record, and instead of making this a comment on their post, I’m gonna put it on my site. No, half of US homeless aren’t in California. Let’s check the facts.

He’s citing a White House report, so take the numbers with a grain of salt anyway. They’re not Census or the US Department of Housing and Urban Development, and Trump is known to distort facts for his bullshit anyway. Hell, even this post seems to be doing a “el oh el, how bad is the left coast, amirite?”

But even assuming charitability, and factual accuracy from Trump, that WH report says 47% of the country’s unsheltered homeless are in CA. Not “half the homeless in this country”. It states the percentage of unsheltered homeless is 35 – that means the real total percent is much lower than this post exclaims. From the report:

“Approximately 65 percent are found in homeless shelters, and the other 35 percent—just under 200,000—are found unsheltered on our streets (in places not intended for human habitation, such as sidewalks, parks, cars, or abandoned buildings).”

It goes on to say:

“Almost half (47 percent) of all unsheltered homeless people in the United States are found in California, about four times as high as their share of the overall United States population.”

But 47% of 33% (about 15.5%) is a lot less impressive than “wew CA is basically the whole nation’s homeless shelter”. So let’s also go over some concurrent factors, shall we? According to another US government site run by the Treasury, Datalab currently claims the distribution is closer to this. 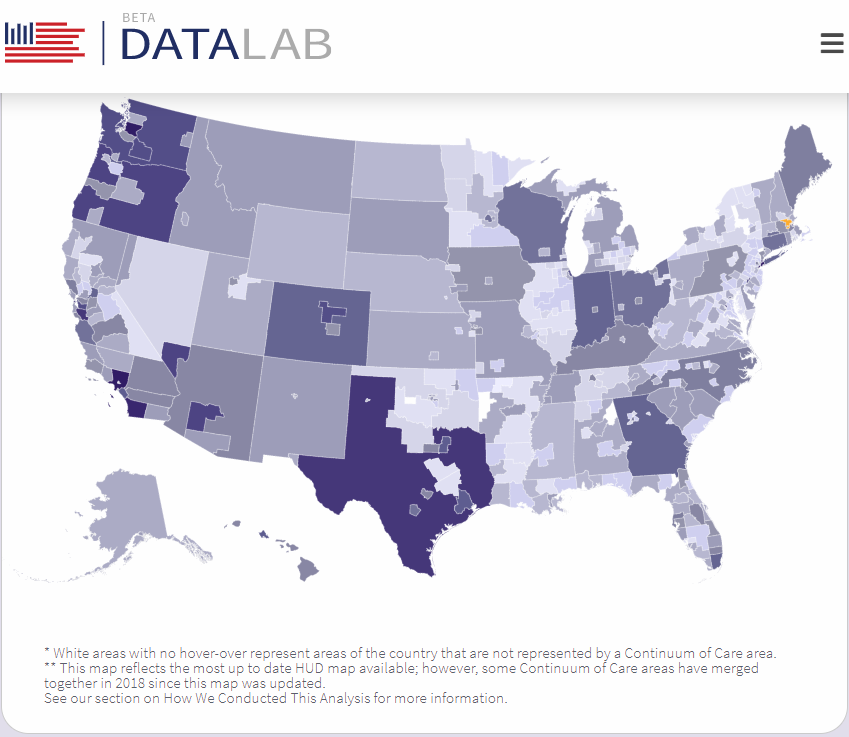 And according to the same site, the areas with the most homeless are also the best funded for homeless programs. 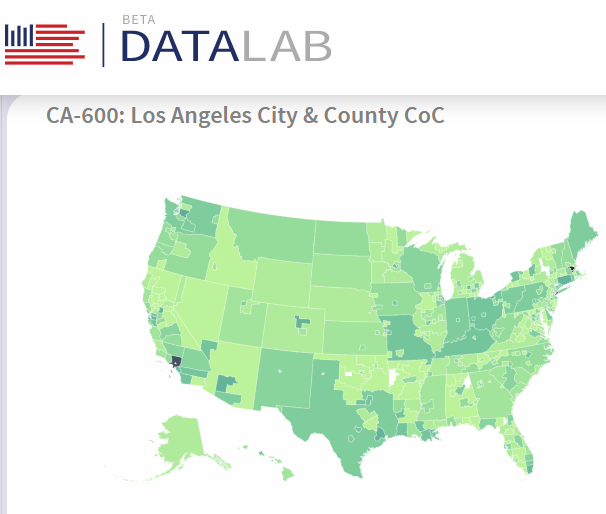 So uh… yeah – the places best funded will have higher rates of homelessness. If you build it, they will come. Of course, even that claim is exaggerated – according to Politifact, 13% of LA county’s homeless are from out of state. So if you call that a representative slice of percentages, only 13% (at most) of the 15.5% are from out of state, and likely much lower, since we’re still talking unsheltered homeless.

So why did this claim circulate so widely? It’s a political football. That’s why. In June, Trump’s White House signed an executive order, forming a committee on eliminating what he called “regulatory barriers” in the way of reintegration. “Like many Americans, the president has taken notice of the homelessness crisis, particularly in cities and states where the liberal policies are combining to dramatically increase poverty and public health risks,” said Judd Deere, a White House spokesman.

So it makes sense that, months after this was issued, he’d come out with a paper highlighting the ideas. He’s gonna fix California! Unlike those dumb liberals. They ruined it and aren’t doing anything to fix it! Half the country’s homeless!

Sarcasm aside, the report makes some good points. CA is as bad as UK in terms of housing permission in major urban areas, and the higher the price of homes, the more homelessness an area experiences. So cutting regs would go a long way, if he can pull it off. So far, he’s only made it harder for immigrants to get assistance. We’ll see if he delivers on the rest.

But before you say he’s slashing regs, one of his policy prescriptions is a “right to shelter” program in California. What that essentially means is that they’d have to build huge amounts of new shelters, to meet minimum standards of quality, costing a huge amount of money. According to the UN, which is the model for the majority of RTS advocacy:

“Everyone has the right to a standard of living adequate for the health and well-being of himself and of his family, including food, clothing, housing and medical care and necessary social services, and the right to security in the event of unemployment, sickness, disability, widowhood, old age or other lack of livelihood in circumstances beyond his control.”

That economic impact would likely raise all prices, including home prices, which would basically funnel poor people into new shelters, if Trump’s assessment is correct. This happened in NY, which is the model for the RTS argument. Some shelters are even too full to take entrants. Too full of people the government tried and failed to problem-solve for. Maybe government isn’t the solution to our problems? Maybe government is the problem?

But my point is simple. This isn’t as simple as CA having “half the homeless”. That’s absurd, incorrect, and the result of misinterpretation of numbers resultant of turning CA’s homelessness problem into a political football. CA is the whipping child for many ideologues, and I’ve pointed out, many times, to many people, that CA isn’t as bad as the obvious caricature insists. But claims like this persist. Most likely because it conforms to peoples’ biases, and helps them feel superior about not living there.

As someone who grew up in CA, I can tell you definitively, the homelessness problem is bad. But Trump isn’t the answer. Community and family are. Being there for people, running the counter economy, regardless of what regulations are in place, and helping people avoid homelessness, sheltered or not, is the solution. Not more government (especially Trump’s variety), and not offhanded social media posts.

Next time you see someone make this claim, or use it, send them  this article. And feel free to check out the rest of my “Better Than Snopes” series, and suggest things you want me to hit next in the comments. And feel free to tell me if I got something wrong, here or anywhere else online. Gonna hit a lot of stuff hard coming up here, and unlike government, I plan to be accountable. Someone has to be, right?