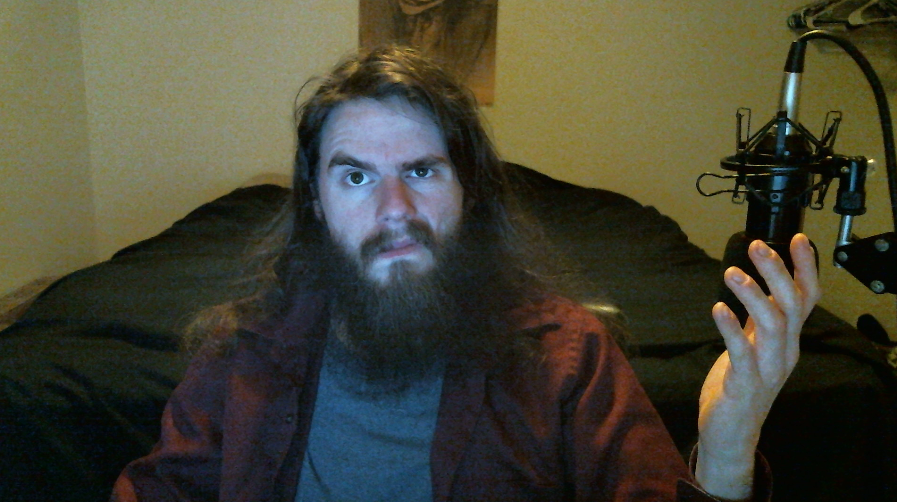 I’ve had issues with my hardware for awhile now. I describe all of them in a fundraiser I have up for new gear. I put that in the thread when I post content. If people like the content, and they concretely want to help me improve it, they can send a few bucks. I also include a message. Today’s was “If you want to help me get a PC that will help me double my content and lower my stress, I have a page set up for that. 49% of the way, and I have four days left. Thank you all!” So someone DM’d me, asking what, specifically, was stressful.

Well, I have thousands of eyes on me, regularly. I hope to someday make it millions, but in order to do that, my quality has to improve. So I try to do that – hard – every day. Every day, I get up, take 300 mgs of powdered caffeine, turn on some hostile music to jar myself to alertness as soon as possible, read and reply to as many notifications as possible within the first 30 mins, and spend the rest of the day, with few breaks, researching, writing, and trying to put out something good. Something that i would consume if someone else put it out. Because there are thousands of eyes upon me. And they deserve good things, especially if they support me.

So I conceptualize everything.I take notes. I crosscheck, crossreference, and throw it out if it’s bad. I’ve thrown a lot out too. Quality is important, and if it’s not high,it shouldn’t be public. Because of the eyes. I put together a mental storyboard. IO jot shit down in my steno pad. And I screw articles into my brain, and keep laws and TOS in mind, to make sure that if my content gets banned, there’s no way it’s my fault. I get some exercise and food in every day, but I normally spend about 9 hours of it working, and I haven’t had a vacation in years, and few days off at all. I also don’t normally even make minimum wage, and I have no savings. And because of the nature of what I discuss, if this ever dries up, I have no employment prospects either, and it will be a sharp downhill spiral if I ever fail completely.

I’m angry, and many people have noticed that, but I’m mostly angry at myself, because even when my content is good, it’s not as good as I want it to be. And I hit mental and emotional walls a lot, because no matter how angry I am at other people, I’m always angrier with myself for how little I seem to be doing. I’m perpetually hanging over a pit of spikes, and always on the edge of losing everything, and there are thousands of eyes on me, who would all see it happen if it did. So every day is just a dogged refusal to lose -a constant struggle with all of this, and a fight to not sell out or fuck up. And I’m unemployable, living two states away from family and friends, with next t no safety net, so if something bad happens I’m on my own.

And to top it all off? I get hardware issues. Like today, when I tried to do an interview, only for my PC to lose connection several times, likely due to the same USB shit I talk about in my fundraiser page. My page I’m consistently accused of “begging” for posting alongside content I worked hard on. My interview today woulda been great – it probably will when it happens again – my guest and I rescheduled. But that’s not all. Because this PC is old, it can’t even render certain things, walling off many functions of my professional software. Because of that, it also takes a long time to create video files to begin with, and because of the same USB problem, it takes forever to upload. I could double or triple my content, and improve quality overall, if I wasn’t just constantly waiting for my hardware to work, and to add to that, I could have a more reliable internet connections, so that when I was talking about great things like libertarian unity, the stream wouldn’t fail.

But no matter how good my ideas are or aren’t, I can’t do them if my hardware fails. And it does, frequently. It also constantly reminds me it’s old, by placing a blue screen over everything, saying Windows 7 is no longer supported, and I need to get something better. I’m trying! Really. And that doesn’t even get into my phone. Broken charging stem, unchargeable battery, and more! Can’t be unplugged for more than 40 seconds, and can’t be plugged in without something holding the charging stem in the right position. It’s the least mobile phone I’ve ever had! I literally carry a backup battery if I need to go out, and constantly keep that pressure on the stem with one of my hands.

So I’m hanging over a pit normally anyway, and my hardware is like a worn rope carrying my weight. It hasn’t completely broken yet, and for that I’m grateful. But it’s close, and every day is just another reminder I’m close to dropping into tht pit at all times. And there are thousands of eyes on me, some of them mocking me for even suggesting there’s a problem. Get it?

So yeah – I’m stressed. Maybe you wouldn’t be – maybe you’d have a better response to these situations. I don’t know you. But I figured I’d lay it out there, anon on Twitter, since you’re not the first to ask. I hope this helps. And people have a word for this – they call it “burnout”.

Well I’ve been burnt out for years. Tired, angry, hostile, and constantly waiting for everything to break, and watching it all fall apart, piece by piece, isn’t good for me. So why am i still making content if it’s so hard and stressful? There’s a concept called the Toolbox Fallacy. It’s where you say “if only I had x I could do y”, and you ignore that the root cause is not x, but your misuse of z.

I still “can” make content. Technically. If the hardware gods smile on me, and if Xfinity aren’t being punk bitches. So i push forward, and do what I can. But every day is another reminder of how little I can do, how fragile all of this is, and how much more I’d be capable of if I wasn’t so limited. My circumstances frustrate me, but they don’t control me, and I refuse to be ruled by chance. And all I hoped to get out of writing this was to not only rant, but let someone similarly in my position know they aren’t alone. I’m in this, permanently. I passed the point of no return long ago. I’m fucked if I fail, so I proceed, against the odds, and I’ll be damned if I lose now. I mean, if a fraction of my followers chose to throw a dollar at this today, the problem would be solved tomorrow. But even if I never see another dime, I hope to continue being a thorn in the side of the establishment, and fucking with everyone’s notions, until I’m sleeping under a bridge. Because this is what I chose to do. And I won’t let my choices be taken away.

So here’s to being stressed. I’m used to it. The breakfast of champions is my morning cup of hostility, and I’ll ride the high all day till I’m off a cliff like Thelma and Louise.

Thanks to those still here. Gonna make it worthwhile eventually.