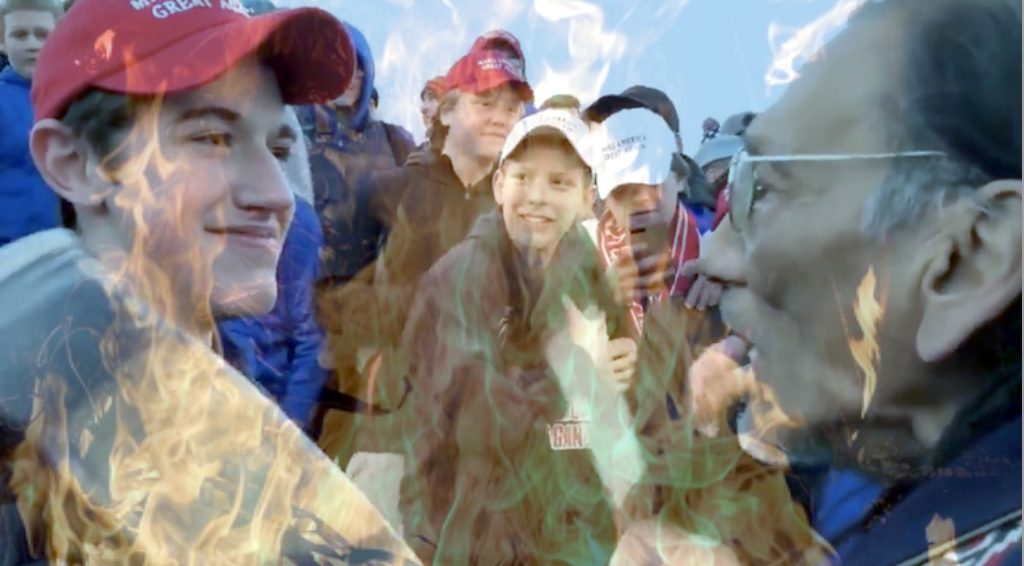 If there’s one thing you can trust the establishment to do, it’s lie. A rather disgusting example of this sort of lying is the case of the #CovingtonCatholic. If all you did was believe the mainstream media headlines, which are all screeching in unison against this child, you might get the impression that a howling mob of racists surrounded a Native American veteran with the intent to harass and intimidate him. Impartially examining the facts leads to another conclusion entirely. Before you brand me racist, hear me out.

A common, and rather upsetting, element of modern media is its tendency to take a clip of an incident for commentary purposes, rather than look at the full information available to them, and give a thorough analysis based on that. This is both absolutely and obviously the case if you look at anything other than what has been presented to you by many mainstream outlets. Slate, the Guardian, the Boston Globe, the LA Times, Huffington Post, Washington Post, And CNN have all taken the side of the Native American. But the cost of this transaction was the truth.

To give you an idea of what is being said about the child, and the incident in general, I want you to watch this CNN video, and how it abuses the narrative, and ignores any side but the side against the kid in the Make America Great Again hat.

Notice a few things about this video, including the fact that they only included a very short video, when there is almost guaranteeably more footage. Anyone with a skeptical mind would automatically request the fuller footage. But they’d not be provided that sort of context by CNN, who would rather you just believe the narrative they baselessly assert. Fortunately, I don’t have a job at CNN, so I’m not wedded to their narrative. So, I decided to do a little digging myself.

The truth is, however, that not much digging was required . In about 10 minutes, I found more information on Twitter than most of these outlets included in their entire article. The information I got paints a vastly and starkly different picture to the one they have canvassed. What I saw was a group of obviously right wing students, or visibly student aged people, Standing in a group, which was approached by the Native American in question, and a short line of others. Those people work their way into the crowd voluntarily. The man in question even slips in his interview, ADMITTING he put himself in the situation! But CNN ran with their narrative, while including information that DESTROYED IT!

Don’t believe me? You should probably watch this video posted by Nick Monroe, which proves that the narrative run by the establishment is a LIE which does not reflect reality.

MORE CONTEXT:
-The #CovingtonCatholic boys were engaging a counter protest,
– then the Native man walked up to the crowd as they were doing a school chant, – then the full length video you saw passed around.

*THEY walked up to KID with the drums. KID DIDN'T walk up to THEM.* pic.twitter.com/B46HP4RxAw

But this man went on CNN and helped them tell millions of people a group of Catholic Republicans simply harassed the man, who has been possibly identified by a pro-Native group.

Thank you to @VinceSchilling of @IndianCountry and many others who identified the proud Native man who is being harassed. He is Mr. Nathan Phillips. I’m reposting this video from “ka_ya11” on IG. This man’s words pierce my heart. The grace. The wisdom. The hope. pic.twitter.com/BKOA40SVq5

But not all Bluechecks were as civil, and many have called for violence on the kid. Here are some examples of that.

Every single one of these kids was once, pretty recently, a baby who didn’t know anything about anything in the world they were entering. This is the world given to them. (Also, I want to punch all of them. They really need to be punched.) https://t.co/UkZVpCGbru

I'd pay money to punch that smug little fuck.

Giving a shit-eating grin to a Native American's face isn't legally violence. But he is smiling *about* the violence. He is saying, "my people hurt you, and you can't touch me even while I gloat about it." It is fascism. And you should punch fascists.

Someone will. Just not at a videoed protest. IMO let's punch nazis in private where they can't use the videos as a recruitment tool.

I would put $1000 into a gofundme for someone to punch him right in the fucking mouth.

maga lowkey does translate to punch me https://t.co/WWOXKgsw1p

So here’s what happened… A kid was approached by a man beating a drum loudly in his face. He stood there and smiled, with the sound in his face. Now people have pictures, and they’re violent, and to whom? The child. And the media joined in, completely blind, and disinterested in anything but what quickly sells articles, backing their motive. The child was a white republican, and the other was not. I’ll let you be the judge of motive.

Now, I’m anarchist. I’m not on the Trump Train all of a sudden, and with my new site, I plan to hit Trump pretty hard over his next six years, but this? Let me talk to supporters of this narrative candidly for a couple seconds. This is the kind of thing that gets your side looking like a pack of hyenas, out for any kill, no matter the ethics. Fuck that, and fuck you.

For even tweeting about this, I already had someone claim I was supporting the march, and “defending baby Hitle[r]”. 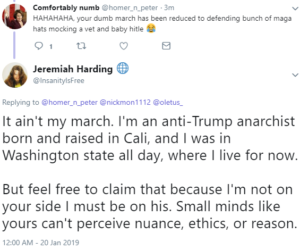 I’m not on the kid’s side politically, and I may not have even liked what was going through his head at the time – I’m not psychic, so I don’t really know. And many of them were taunting the man as well – not for nothing, plenty of what was said, including mocking Westward Expansion and the brutal treatment of indigenous people, is despicable. I in no way condone it. But the kid everyone’s threatening? Guilty of no crime, and no spite, but not looking the way they want. Put it in perspective, for fuck’s sake! The man admits to putting himself “in front of” them, and then baselessly claims they wanted “the freedom to tear [him] apart”, and CNN just RAN with it! The school is considering EXPELLING the kid, for STANDING THERE!

So ask yourself, is this how we deal with disagreements in America now? Allow the biggest establishment figures to run riot on a group of kids with ZERO journalistic integrity, and stand by while the atmosphere this creates puts out calls for violence? Because believe me, leftists… this isn’t a future you want, when the tables turn on you.

Sent just before I was to publish it. Move to 1:12 to watch the man in question voluntarily approach, and walk into, the crowd.

New here? This is what this site is. Want to see more stuff like this? I literally CAN’T do this without your support. Here’s a Venmo, if you so choose. Here’s a Patreon. And here’s a Patreon alternative, supported by cryptocurrency. If you want to support me, but your preferred method isn’t listed, hit me up and I’ll try to connect. Thank you deeply in advance, should you choose to.