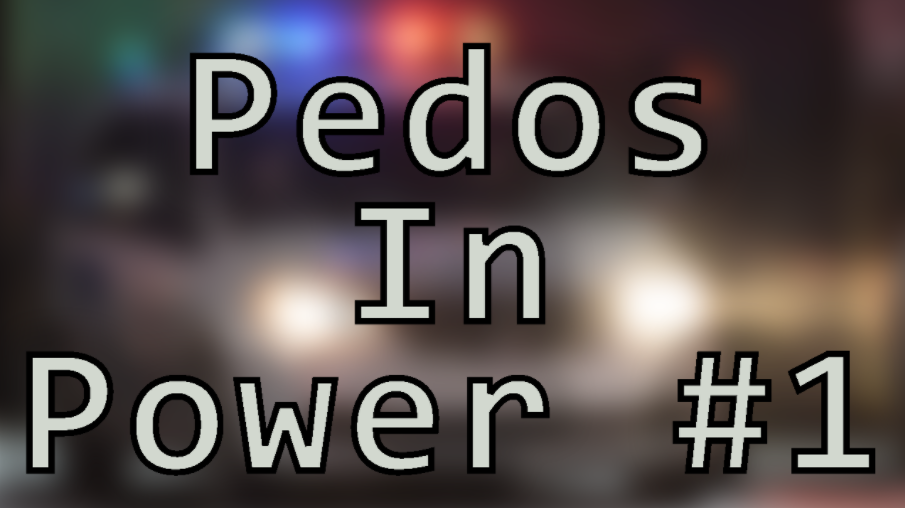 The first in a long series, I discuss pedo cops in segments of five each. These cases take place in Texas, California, Washington, and Illinois, across a variety of officers. Many more to come, so feel free to like and sub if you want regular updates on the #PedosInPower series.

So in case you haven’t heard yet, Epstein didn’t kill himself. I’ll be making a video on the whole Epstein situation soon, but instead of doing the same thing everyone else is doing, and making vids about him, I think it’s more important to look at the fact that people in positions of power are caught raping children all the time, usually getting lighter sentences, and most people don’t even know their names, faces, or crimes. So in my series of #PedosInPower, I’ll be shedding light on five authority figures caught sexually assaulting kids, or assisting those who do, per video. Additionally, only those convicted of these crimes will be featured – my goal is to convey facts, not perpetuate potentially false allegations, or hold court on my channel. Let’s hit it.

1. Stephen Robert Deck was a California highway patrol officer convicted of attempting to solicit sex with a minor. Chris Hansen’s efforts would expose not only him but many other police officers as would be sex offenders, as part of an ongoing series called Perverted Justice. In this particular case, officer deck, who was also reported to have attempted to solicit sex from two non decoy minors, was lured in by a decoy named Amy, telling her he wanted “to eat her beautiful young cunt”, “stuff daddy’s cock inside her”, and much worse, to drive for almost an hour attempting to engage in lewd acts with a minor. Marc Kelly, the Orange County superior court judge at the time of his original conviction, and a former prosecutor, gave him preferential treatment and decided on no prison time. Deputy district Atty. Robert Mestman gave him probation, and that’s all, which deck would later appeal. In 2014, the ninth circuit would overturn all of that related to lewd acts with a child letting them off on a technicality, and he now receives disability payments on the taxpayers’ dime.

What Happens if a 51-Year-Old Cop Wants 13-Year-Old Girl for Sex?

2. But sometimes you don’t even have to go very far from home, because sometimes the threats are in your home. Such is the case with Daniel Amador a Seattle police department Sargent found guilty of first degree child molestation second degree child rape third degree child rape and first degree incest. All of this stems from rapes that had been occurring since his daughter was nine, whereby issue would be pinned down either partially or fully clothed, groped, and sometimes raped, all while her father she in mental manipulation, to make it seem as though she was being rightfully punished for things she did. For is other daughter, who was supposedly not the favorite, he would lie on top of her while doing the same and worse. Additionally, he would block off the door while he had the favorite daughter in the room, forcing the other one to watch cartoons for hours while he had his way with her. The children engaged in self harm, and Amador would regularly tell them that they would be separated if he was ever put in jail. This meant they didn’t say anything until much later in life. The “favorite” would open up later about everything, and the less favored one would recall the cartoons, saying “I just thought about immediately all the times I would watch cartoons for hours and I was completely oblivious and she had been getting hurt her whole life. And I didn’t know.”

3. In another case of a cop abusing a family member, Harris County patrol officer Andrew C. Sustaita Jr., son of a veteran investigator at the sheriff’s office, Was sentenced to 27 years in prison for having around 200 videos in images of child porn on his computer, some of it involving a family member’s daughter. Much of these images in videos were taken himself, and some of the disgusting sexual acts involve him specifically. His department found out he had taken a video of him fucking a dog, and after they searched his devices, they found a trove of child porn, some of which was taken when children had spent the night at his place in sleepovers. The judge described everything as horrific, and the mother of one of the victims address the courtroom saying,”For the monster that is before us today, the cost of your crime cannot even begin to be computed as its effects may be compounded throughout the entire life of my baby…Who knows how much counseling she will need? Who knows how her future relationships will be effected? Who knows what my baby thinks when looking at an officer of the law or a man or a family member.” A monster indeed.

4.In another case of police abusing trust, Robert Cain of the Los Angeles Police Department, son of another officer, was caught sending sexually explicit messages to a cadet, who was under 16 at the time. Afterward, it was found that he had performed oral copulation and had sex with her. He pleaded no contest in court, and faces an exceedingly light two year sentence. He’ll register as a sex offender, and won’t be able to be a cop again. Cops found out about his abuse because they were investigating allegedly stolen cruisers and equipment, taken by cadets under his control. Ten days before the cruisers were stolen, he took the cadet on a trip to Six Flags, abusing her multiple times. He was also sentenced to two years in prison on illegal weapons charges. Trust cops to get light sentences for breaking the law – a solid example of blue privilege.

5. “He told her it was going to hurt,” prosecutor Lori Schmidt told The Washington Post. “And she screamed.” The last case is former Illinois policeman David L. Wright who forced his victim of over a decade of abuse to take the stand for 30 minutes, only to abruptly plead guilty in the middle of it. The quote I started this one with is a recounting of her first encounter with him – taken into Wright’s bathroom in the second grade. “As far as waiting [10 years] to disclose, this isn’t uncommon in sex abuse cases,” Schmidt told The Post. “Sometimes, people never disclose.” He received 23 years sentence, but got credit for 478 days already served in county jail. He’ll have to register as a sex offender. But in my opinion? Not enough. And the judge seems to agree. Kane County Circuit Judge D.J. Tegeler said “You have not done anything but ruin her.” Tegeler also said “Quite frankly, I think 500 years sounds reasonable,” as the sentence was delivered. Couldn’t agree more.

If these stories anger you, and they should, just remember them the next time you see a post about Epstein, or some other high profile pedophile, in power. The state’s monopoly on force is all too welcoming a haven for the vilest scum among us, and sometimes, those people entrusted with the power to protect them are drawn to that protected power, to use it against the common person, and shield from accountability. Also, get involved in government accountability projects, and follow pages dedicated to regularly exposing both the state and pedophiles, because there’s more overlap between those categories than many want to admit. If you want to join my regular efforts to hit pedos and help kids and adult victims of child sexual abuse, feel free to get on Keybase, and find the antipedoact server. We’ll be glad to have you!