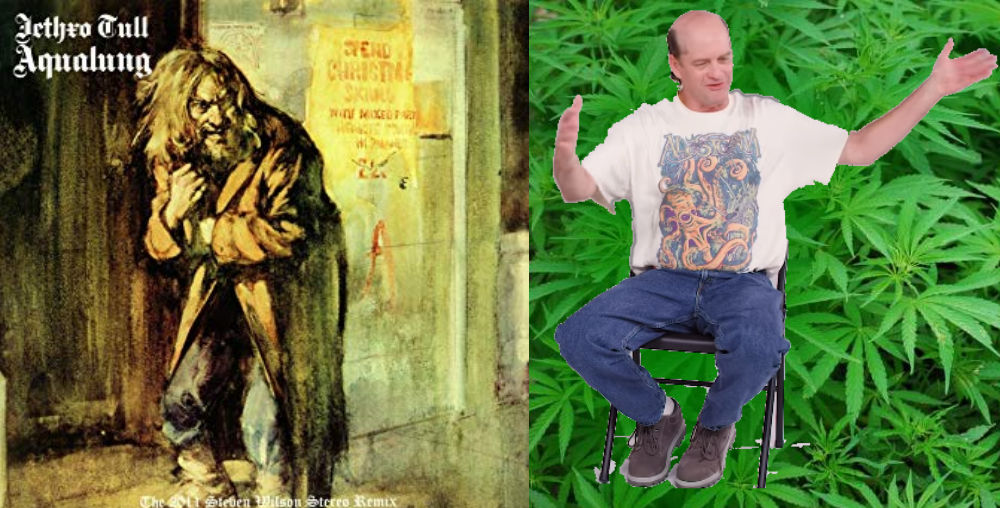 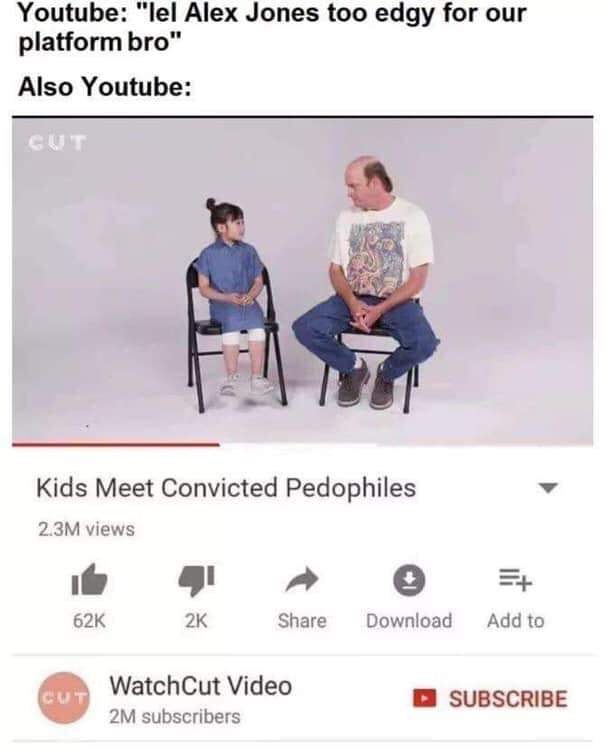 Fuck this image. Fuck every iteration of it. Why? Because after a simple Google search, I had “Kids Meet Convicted Pedophiles”, DEBUNKED – and it took seconds. Here’s what it looks like in reverse image search. 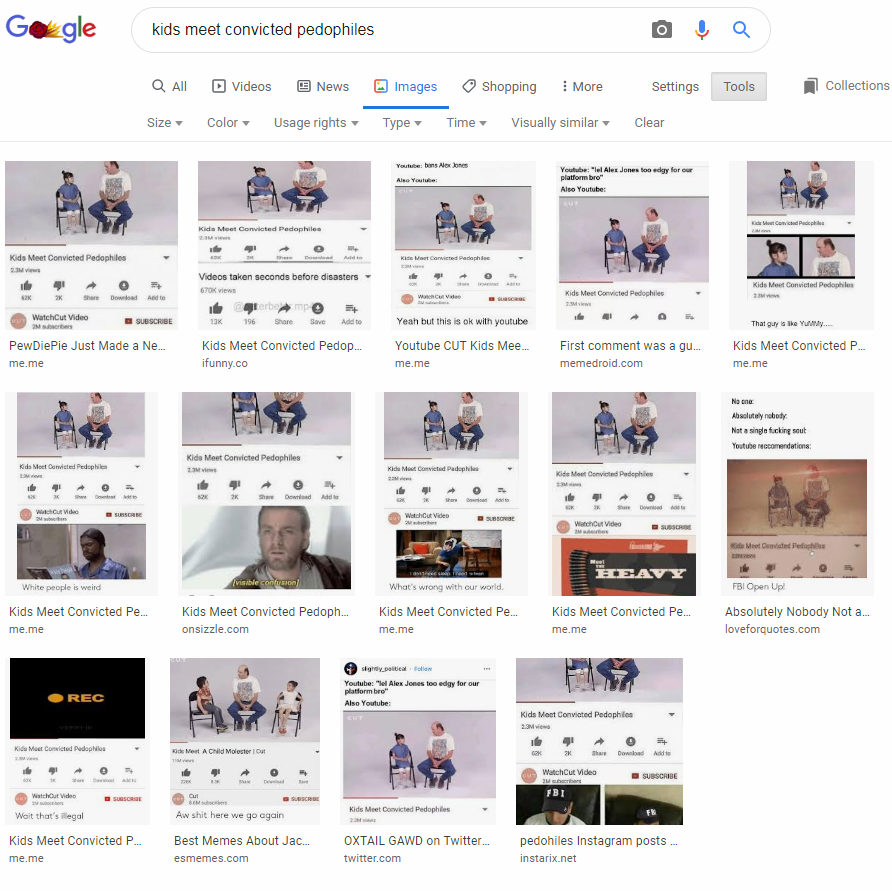 WOW all these different people spread it – it must be true!

A little digging shows no such video exists in their library, and these two are the only ones which come up after searching the term. 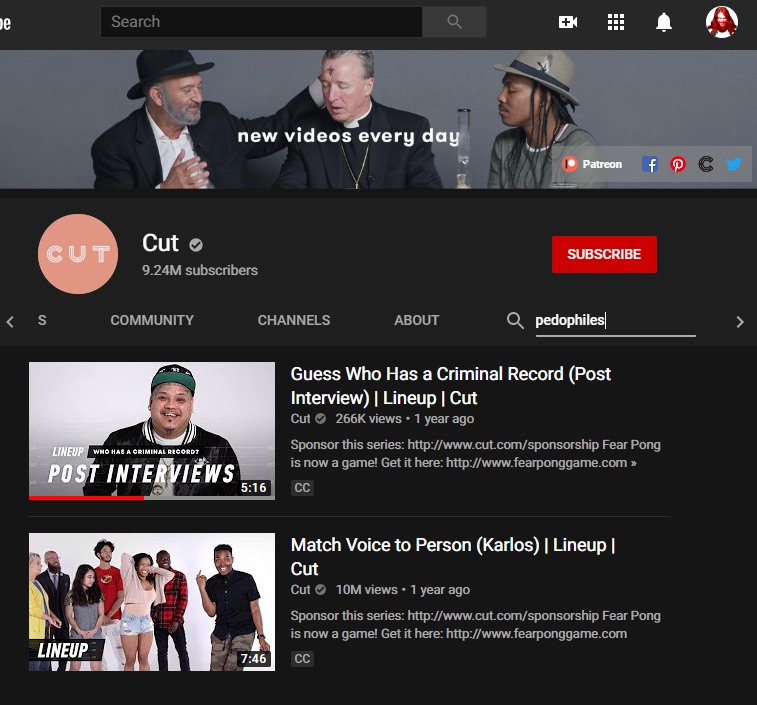 Cut has NO vids about pedos. And why would they? A Buzzfeed clone wouldn’t use a banned word in their title! That would cut views, revenue, search visibility, and more. So I looked up a different word.

Ladies and gents, the closest thing to the alleged vid – so let’s watch, and see if there’s even a grain of truth in this image.

What heinous crime did this alleged “pedophile” commit? 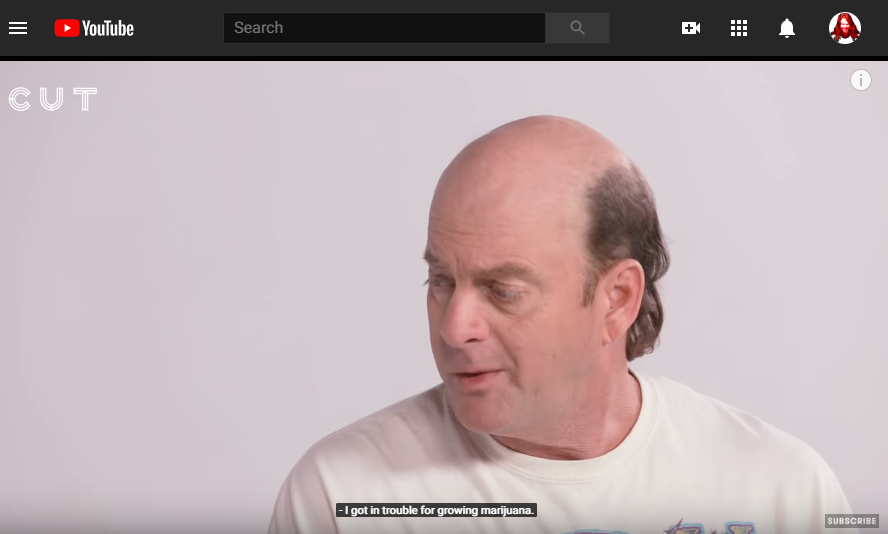 And all of you who uncritically shared that meme in any of its iterations likely fucked up a man’s reputation, wherever he goes, and forced him to watch his face become that of a vicious lie, all for uncritical lulz. And why did you do it? Because society has an image of men which implies they’re vicious predators, and demands they prove their innocence, regularly.

For example, the song “Aqualung” by Jethro Tull is all about assumptions he could make based on a single photograph.

“Aqualung wasn’t a concept album, although a lot of people thought so. The idea came about from a photograph my wife at the time took of a tramp in London. I had feelings of guilt about the homeless, as well as fear and insecurity with people like that who seem a little scary. And I suppose all of that was combined with a slightly romanticized picture of the person who is homeless but yet a free spirit, who either won’t or can’t join in society’s prescribed formats.

“So from that photograph and those sentiments, I began writing the words to ‘Aqualung.'” 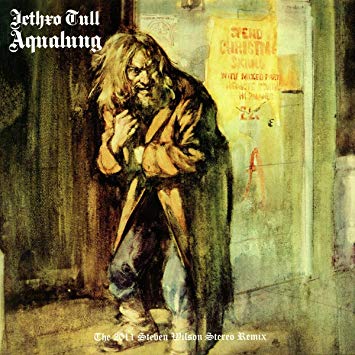 So what heinous crime did he commit? Well let’s see – the genetics to have pattern baldness? His clothes? Talking to a little girl at all as a man? Ricky Gervais parodied this mentality too in his role on “After Life”.

I’ve been doing quite a bit of research and action in the anti-pedo sphere lately, and I take it pretty seriously. Images like this do nothing but waste effort, commit libel, and destroy lives. Plenty of people assumed it was real with no research, and those people spread vicious rumors that could hurt innocent people. Not only that, but ultimately? You abuse real victims of pedophilia by using it to tar a man you don’t know for laughs. If you want a meme for pedos, go with Epstein or Cosby.

Hell, some of the people spreading it are anarchists and libertarians who normally oppose the drug war, so not only would they not think he was a pedo if they didn’t blindly boost bullshit, but they’d not even want him prosecuted. It’s WEED. Nobody was hurt by it. And the idea that a YT channel with millions of subs would risk that by putting violent criminals next to children? Get real!

This vid had two adults in it – a man who farmed weed, and a man who possessed a gun. Two nonviolent, nonsexual offenders, guilty of “crimes” that highlight just how ridiculous and worthless the state can be.

And the vid was designed to discourage kids getting criminal. They recounted being forced into race gangs in there, and other things otherwise peaceful people have no business doing. And now you want them to live the rest of their lives with the stigma of child predation in which they never engaged?

Just think before you post, alright? It isn’t that hard, and since (reasonably I think) people want pedos dead, you’re trusting anons with someone’s life. At the very least, understand that by not looking into things, you enable cancel culture. Don’t do that. And share this piece with anyone who posts that lie.