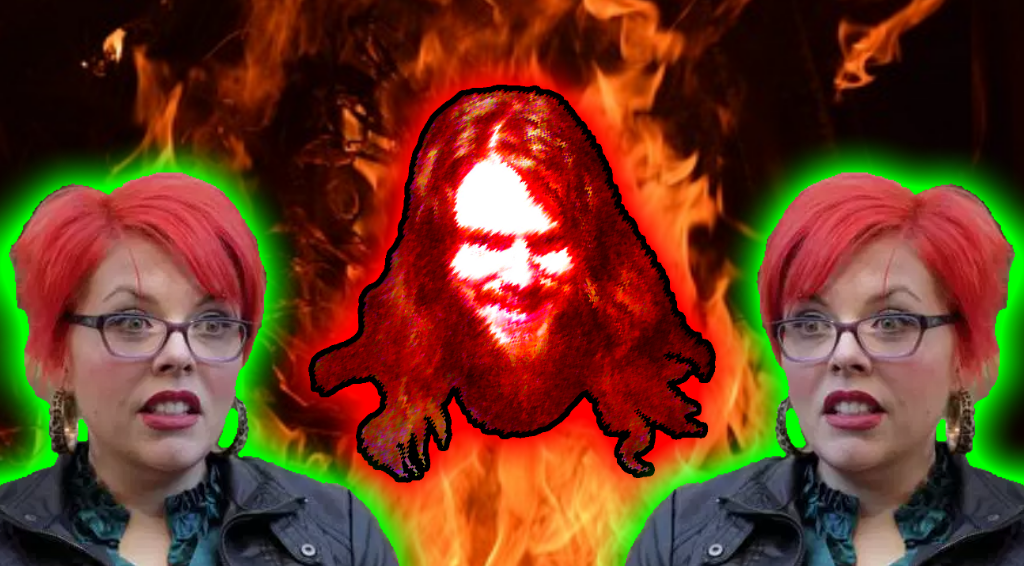 Being a professional Terrible Person, and a mandatory resident of 50 blocklists, as of today, I’d be remissed if I didn’t occasionally do my part to trigger the libs. And by that, I mean “post comments that get responses so long later that they were made when Twitter still had a 140 character limit”. And by that, I mean “holy shit, does she just namesearch herself for a living?” Who is she? Chanty Morris – nicknamed “Big Red” for being callous and dismissive to MRAs after being a part of a group which interrupted a meeting illegally by pulling a fire alarm. And what did she do after? Well, she harassed attendees outside, and told them to shut the fuck up a lot. And now she’s found my Twitter. So let’s give her a show, eh?

I’m gonna make this short, because I think most people who click the link will be mostly here for lulz, but if there’s any shilording you want me to focus on for another article, let me know on Twitter, or the comments or something. To get into this subject, and for those of you who don’t know, I’m gonna start off being relatively fair. Here’s the full, unedited video most people reference talking about her.

Yikes. That’s what rational people should think after watching it. Or some variant. Back when I first saw it, I was heavy into antifeminist/anti-SJW shit, and while I still occasionally hit it again, mostly I’m trying to smash the state, and I see this kinda thing as a distraction. But last night, while I was watching Luke Cage, and occasionally checking notes, she’s in my mentions. Like… okay. So what brought this up? Well, apparently, this isn’t even the first time she’s reached out to me. Apparently, she also hit me up March of last year, upset at what I said about her then. Here’s that interaction. 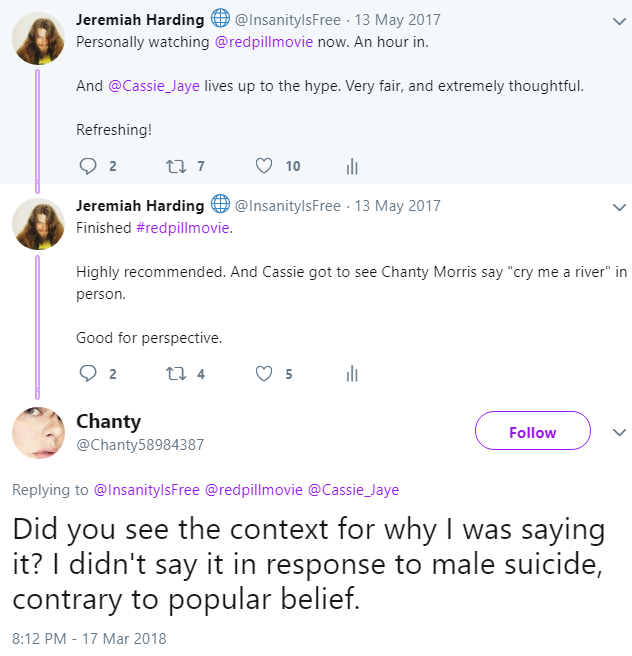 … So I guess maybe she was upset I didn’t respond? PSA: I get thousands of notifications a day, and sometimes over a million if I hit a stride on my social media. Add to that that Twitter actively suppresses my content and occasionally hides peoples’ replies, and I might not get to you. Hell, I might even see something and forget. It’s not usually personal, contrary to popular belief. But here we are, almost a year later, and she’s back. this time, mad online about two things – the above thing, which we’ll get to shortly, and the following. 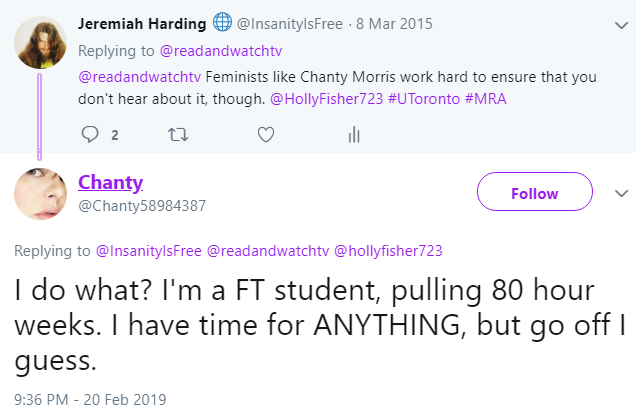 I assume she means “I don’t have time for anything…”, because the other thing would be a weird thing to be adamant about here. Now, that might be a reasonable point, but as the above video shows, with some clarity, she has plenty of time to stop people from hearing MRAs. For some context, here’s what happened immediately before the argument outside…

So let’s be clear here. She didn’t pull the fire alarm. But she cheered when it was pulled. And this is only after joining a group of people who made it too loud to hear a meeting where they wanted to air grievances and discuss rights. The mandatory evacuation that proceeded was an illegal policing of their thoughts, following a despicable, tantrum-like noise pollution they probably falsely labeled “protest”. So she’s a “Full Time Student™” with 80 hour weeks, and yet, that week, she made it 81, to help silence and harass people with different viewpoints to hers. That was why I initially didn’t like her, not even discussing the sorts of vitriolic statements she made.

Now, being a penis haver, I am probably biased here. I don’t think my peripherals make me, innately, a worse or better person, so when someone wants to stop people like me from talking about what it’s like to be what I am, and deny me my experiences and struggles, I’m gonna balk. She spends most of the interaction with those people – after silencing them to begin with – ranting in their faces, telling them to shut the fuck up when they try to respond to individual points, and saying they weren’t interested in hearing what they were there for, and accusing them of trying to talk over her. Keep in mind, they started out talking over these men. She’s a living embodiment of shotgun fallacy… more interested in steamrolling opposition and feeling good about herself than actually having a conversation to begin with, much less moving a conversation forward.

But aaanyway… this brings me to yesterday, where she tried again to contact me. A chief point she wants me to address, apparently, regarding her interview with Red Pill Movie director Cassie Jaye, is her clarification that when she sang “Cry Me A River”, it wasn’t just her being a callous bitch about male suicide, but the lack of equal representation for men at the Center for Addiction and Mental Health. Here’s a video focusing on her doing that, instead of that more general vid earlier, followed by her response to me… 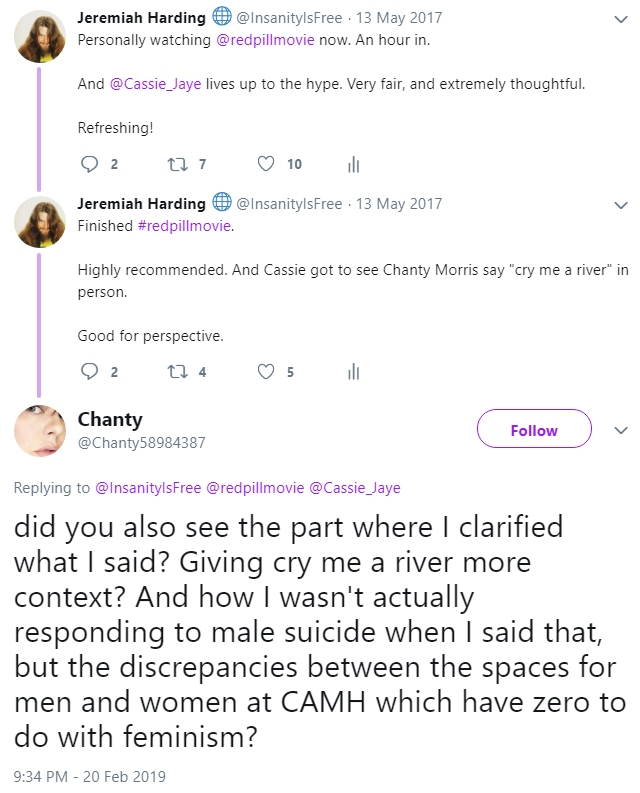 So to be clear, CAMH is, according to their website, “Canada’s largest mental health teaching hospital and one of the world’s leading research centres. Where Mental Health is Health.” And they happen to be the largest, but somehow happen to only have one program for men and four for women by accident? Not by a bias? Not by funding demands designed to tug peoples’ wallets out by their heartstrings?

Nah. She prob won’t read this, but in case she does? It has something to do with feminism, Chanty. Much ado. The fact that feminists, including you, see all gendered issues as directly stemming from patriarchy is the reason you don’t think so, but that’s because your brand of feminism seeks not equality, but retribution. You think you’re a “hero”, and that you’re “changing the world”, but really, yourself and the others there were just a buncha spineless cunts, whose only strength came from numbers, and the raw power of the mob. You don’t want to take this alleged “patriarchy”, and replace it with nothing, you want to take it and replace it with a matriarchy. If men get lost in the firefight? Cry me a river.

I’ve been meaning to do a piece like this for some time, but honestly, the idea of waiting for a publication to accept it, or publishing it to my Steemit only for cleaner morons to call it spam and suppress it, instead of arguing my points, kept me from the motivation. Seeing YouTube’s censorship also didn’t help, and it wouldn’t surprise me if my site got listed on HateWatch sometime soon for this, but I don’t give a fuck. She pissed me off then, and wanted to pick at it, so here’s my message to her.

Chanty, assuming you read this, I have a question for you – to ignore. Did you watch the documentary? Hear about the only men-only shelter shut down? Hear about violated parental rights? Hear any of it? Because this is why I separate from much of the anarchist pack, in not hating MRAs, for much of the part. In the first world, every effort was made to liberalize society in favor of women, and no effort was made to ensure men kept up. Add to that that most first-world feminist efforts amount to first-world privilege, while the women of disadvantaged nations, transwomen, women of color, and antifeminist women, are trampled underfoot, and your brand of “feminism” looks a whole lot more self-centered. And you’re not helping. You’re hurting. As an anarchist, to watch society be consistently forced in the favor of women, so politicians can count on an entire class of people as a voting block, and to see how few issues these feminists care about as long as they get theirs? Bothers me. And unlike that peaceful meeting you helped derail (for dummies), you can’t interrupt me here. You wanted a response? You got one.

Now shut the fuck up.

As you can see, I’ve been at this for years. However, as yet, I still haven’t profited from this site. Or really, anything else. You can help change that.