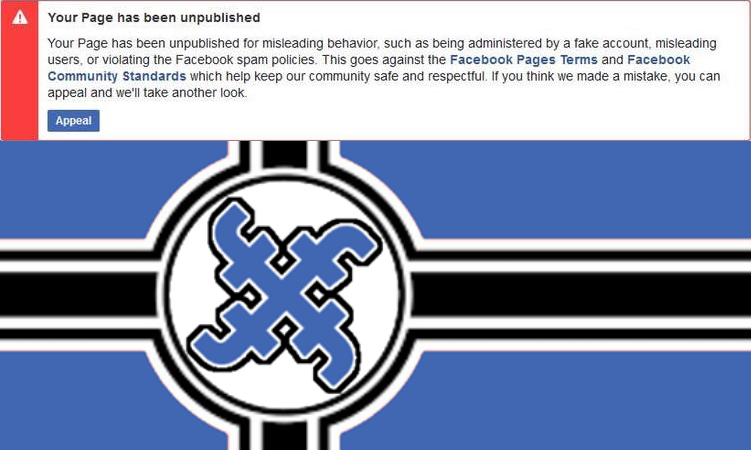 Originally posted to my Steemit four months ago. In a decent follow-up to my piece yesterday about how Facebook LIED me into a three day suspension for “hate speech” I committed none of, “Government Supporters: Facebook’s Protected Class”, Facebook has decided to do even more to prove me right about this, by CENSORING all the most prominent antigovernment pages in an instant!

I shared my post yesterday with 100 friends I tagged, and my close to 5K friends, and about 20 minutes ago, as of writing this paragraph, one of those I tagged, Luke Ensor, links a post by another friend, and longtime ally to liberty, Michael Heise, with screenshots from multiple others, detalining that years worth of work building anti-establishment audiences on Facebook had simply been unpublished in one fell swoop. Police the Police, Police the Police NY, Cop Block, Cop Logic, Rachel Blevins, Gun Laws Don’t Work, The Liberty Principle, Policing the Police, Legalizing Cannabis, Get Involved, You Live Here, Fuck the Government, Filming Cops, New School Raphael 1, Voluntaryist Veterans, Anonymous News, End The War On Drugs, and Hemp were all silenced at once! Also, Psychologic Anarchist, V is for Voluntary, and The Anti Media, and more! 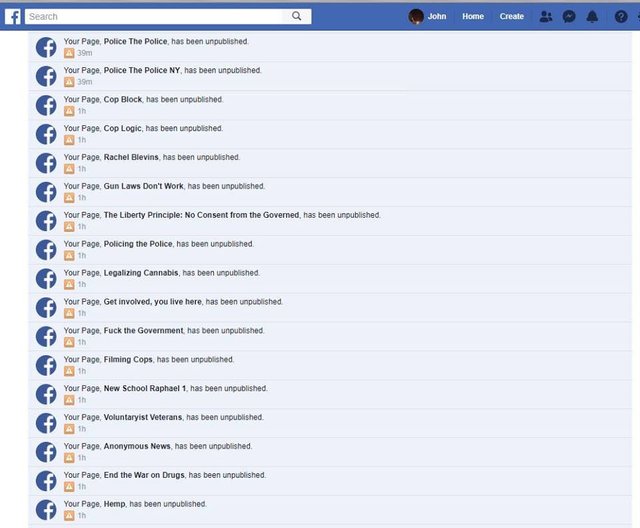 Now, if you buy the mainstream lies from outlets like USA Today, this is simply an anti-spam effort. Eli Blumenthal writes in his piece “Facebook removes over 550 Pages, 250 accounts in latest spam purge ahead of U.S. midterms”:

“Many were using fake accounts or multiple accounts with the same names and posted massive amounts of content across a network of Groups and Pages to drive traffic to their websites,” wrote Nathaniel Gleicher, Facebook’s head of cybersecurity policy and Oscar Rodriguez, a Facebook product manager, in a blog post announcing the latest purge.

“Many used the same techniques to make their content appear more popular on Facebook than it really was. Others were ad farms using Facebook to mislead people into thinking that they were forums for legitimate political debate.”

Now, anyone who has followed these pages for awhile and who doesn’t have a pro-government, pro-corporation chip on their shoulder would be more than willing to say that these libertarian and anarchist pages were CENSORED, not removed for spam. These pages violated NO existing policies, and Facebook is LYING in order to claim otherwise. In Nathaniel Gleicher’s post, he primes readers for his lies by saying “People need to be able to trust the connections they make on Facebook. It’s why we have a policy banning coordinated inauthentic behavior – networks of accounts or Pages working to mislead others about who they are, and what they are doing.”

These pages weren’t lying, however. They’ve been upfront and honest about what they want, and their goals are noble. He, and Facebook by extension, then keep the official lies going by calling these sites “ad farms” who were lying about “legitimate” content production. In this case, that “legitimate” content production would be towing the establishment line, because the only thing which separates their content from USA Today is that USA Today is too chickenshit to piss off corporate advertisers by telling the truth about them, and the government that supports them. I know the people who run these pages, and how these pages were run, and Facebook is LYING about their reasons for doing this, because the reasons they’ve given flatly don’t apply. This is censorship, and censorship is gaining popularity among the Silicon Valley elite.

In the latest of a long line of leaked Google internal memos, they make no bones about calling the free speech the internet could be home to a foundation of “utopian principles”. The document also holds up the Arab Spring as a positive example of what the internet can do, while taking shots at coverage of prominent police brutality cases, such as that of Philando Castile – gunned down for reaching for his wallet during a traffic stop, and Mike Brown – who witnesses still maintain was not a threat to the officer who shot him. The doc also compares those to Logan Paul’s “suicide forest”, Alt-Right and Islamic extremism, Trump Support, and the Peppa Pig meme, hailing all of these things and more as a marker for necessary censorship, or what they call being “The Good Censor”. They claim that hate speech, reprisals and intimidation, trolling, cyber harassment, cyber racism, and venting are all reasons for censoring content, and quote people who think anything less is “utopian”, with many sections condescendingly finger-wagging at users, simply claiming they’re “behaving badly”.

Same with tech firms and governments, but to a much lower degree, and only to then go on claiming that all tech company censorship is at least somewhat directly comparable to the takedown of The Daily Stormer, and Youtube taking down channels that exploited child actors. It goes on to give people “standards” that really amount to nothing more than platitudes, like “don’t take sides” (Hear that, FaCIAbook?), and “explain the tech”, but this is all a thin veneer over the truth – platforms want to crack down to keep ads going, and if you aren’t siding with the guys paying their bills, you’ll be ejected. This document sides with corporations over people making amusing internet content, and compares that to fighting Nazis. The framing is apparent. They don’t care about hate, they don’t care if what you’re doing is against policy or not, and if they don’t like it, it won’t be on their platform long – even if they have to outright LIE about the reasons to shut you up. And this is just Google who’s been leaked, but if you think Facebook is any better, remember, they have the same models of data collection, and for similar reasons, and seem unified in their efforts to block dissent. Pretty convenient this happens this close to midterms, eh?

So be careful out there – you could be next, and there may be nothing you could do about being wiped from the public record, according to mainstream networks. The Matrix, 1984, and Brave New World are appetizer platters for the elites to pick and choose from when choosing how you should be monitored, controlled, and censored, and this isn’t even the first course.

So, this post was originally on Steemit, but I didn’t even profit from it there, as it took me an hour to make sure I got it right, and I didn’t even make $1.50. As yet, I still haven’t profited from this site either. You can help change that.